Special Agent in Charge John Carter said the task force has already worked as many drug cases this year as it totaled last year (160).

“I don’t think we’ll ever stop all of it, but we do as much as we can on a daily basis to decrease it,” Carter told Trenton Rotarians last week.

Carter said ice methamphetamine and opioids are the biggest problems law enforcement agencies currently face, officers are seeing some heroin in the area that seems to be coming out of Jackson.

Opioids are a class of drugs that include the illicit drug heroin as well as the licit prescription pain relievers oxycodone, hyrdocodone, codeine, morphine, fentanyl and others. The American Society of Addiction Medicine (ASAM) found that of the 20.5 million Americans 12 or older that had a substance use disorder in 2015, 2 million involved prescription pain relievers and 591,000 involved heroin.

Carter said the nation’s opioid epidemic is a problem without a quick solution.

According to ASAM, from 1999 to 2008, overdose death rates, sales and substance use disorder treatment admissions related to prescription pain relievers increased in parallel. The overdose death rate in 2008 was nearly four times the 1999 rate; sales of prescription pain relievers in 2010 were four times those in 1999; and the substance use disorder treatment admission rate in 2009 was six times the 1999 rate. Research also showed that in 2012, 259 million prescriptions were written for opioids, which is more than enough to give every American adult their own bottle of pills.

The Department of Health and Human Services says opioid abuse is a serious public health issue. Drug overdose deaths are the leading cause of injury death in the United States. Earlier this month, President Trump declared the opioid crisis a national emergency. The designation offers states and federal agencies more resources and power to combat the epidemic.

The U.S. uses more opioids than all other countries combined, and Tennessee is in the Top 5 of states that consumer the most opioids.

Carter said “pill mills” or pain clinics started in Florida a decade ago. When the legislature and law enforcement kicked them out of the state, the perpetrators moved north to Georgia and have now found their way into Chattanooga and other parts of Tennessee. He said Mexican drug cartels watch trends in the United States. When pill mills move out and/or opioid crises are confirmed, the cartels flood those markets with cheap heroin.

“If you don’t think drugs south of the border affect Gibson County and West Tennessee, you aren’t living in reality,” Carter said. “It’s a big picture.”

Research has shown that four in five new heroin users started out misusing prescription painkillers, and 94 percent of respondents in a 2014 survey of people in treatment for opioid addiction said they chose to use heroin because prescription opioids were “far more expensive and harder to obtain.”

Carter said hydrocodone usually sells for $1/milligram on the street, and oxycodone can sell for $30-$40 per pill.

Carter said that while meth labs are almost a thing of the past in West Tennessee, meth continues to create problems locally. Sheriff Paul Thomas, who with the task force for 12 years, agreed.

“Opioids are a problem, but meth is king,” Thomas said.

Mexican meth manufacturers can get ingredients that the U.S. now regulates such as pseudoephedrine, anhydrous ammonia, and red phosphorus from China. They ship their superior product to America and sell it cheap enough that the task force has only worked two meth labs this year.

Carter and Thomas said meth use leads to increases in property crimes and burglaries.

“It goes hand in hand,” Thomas said. “They’re the ones breaking in our houses and stealing our 4-weelers.”

He provided line graphs that show when drug related arrests go up, burglary related offenses go down and vice versa.

The Drug Task Force is funded through a small grant and the state’s civil asset seizure law, which has come under scrutiny in recent years. The statute allows police to seize money and property from suspects even if they are not convicted or charged. Carter said that the “no conviction or charge” portion of the statute is often blown out of proportion by critics of the law. He said that segment is usually reserved for drug “mules,” people who transport drug money but may not have ever sold or transported drugs. He also explained that civil forfeitures are handled like lawsuits and not like criminal proceedings.

Carter said task forces across the state fight the battle to keep the current seizure law in place in the legislature every year.

“It doesn’t make sense for taxpayers to pay a bill that we can make the drug dealers pay,” he said. “You don’t pay a nickel in tax money.”

Thomas said there are enough checks and balances in place to keep innocent parties safe. He said his deputies probably don’t seize as much as they could because if their finds are on the threshold of the seizure law, they err on the side of caution. Carter said that in the last two years, the West Tennessee Drug Task Force let a total of about $300,000 in presumed drug money go because there weren’t enough factors present to convince agents to seize it.

The West Tennessee Drug Task Force is unique because it comprises the 28th, 29th, and 30th judicial districts. Each district, however, works its own territory but collaborates when cases spill over. Carter has seven full-time and two part-time officers working the 28th judicial district, which includes Crockett, Gibson, and Haywood counties. Officers from the Crockett County and Gibson County Sheriff’s Departments and the Humboldt, Milan, and Trenton Police Departments make up the local task force.

To report drug activity in your neighborhood, call the Drug Task Force at 731-784-0555. All callers can remain anonymous. 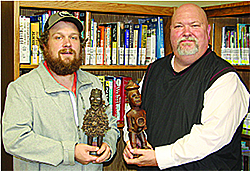