CANDLELIGHT SERVICE – People formed a circle against the inner, sanctuary walls of the Vineyard Church, holding lighted candles in memory of Cayce McDaniel who disappeared 21 years ago this August.

McDaniel, born July 14, 1982, has been missing since August 16, 1996. She was fourteen at the time of her disappearance.
A crowd of about 275 people attended Wednesday’s service, which marked the 21st anniversary to the day of McDaniel’s disappearance from her family’s home on N. First St. The last time she was seen by friends, she attended a youth event at Rev. Hansen’s Double Springs Cumberland Presbyterian Church, located between Milan and Gibson.
“Twenty-one years ago I was Cayce’s pastor at Double Springs (Cumberland Presbyterian) Church,” said Pastor Hansen. “One of the darkest days in the life of our church is that day. I’ve been gone fourteen years, but I’ve always thought of Cayce.”
“This is all the encouragement we need, this turnout is positively outstanding,” Hansen told the audience. “We thank you for being here tonight, for we all can share memories of Cayce together.”
“We’re still waiting”
“The one thing I always fell in love with every time I saw her – she had the biggest grin,” Hansen reflected about McDaniel. “She would smile from ear to ear. She was just a bundle of energy and joy, and what a pleasure it was to have her in our lives. But we don’t know. Just as the Psalmist wrote in the 89th Psalm, he had questions for God: ‘How long, oh Lord; how long?’”
“It’s been twenty-one years,” Hansen added. “We’re still waiting. But we are hopeful. We’re hopeful that the day will come when somebody will say, ‘We’ve found Cayce.’ We’re hopeful that we’ll keep her light in our hearts, and her love alive in our own souls, always looking for that day, when we’ll be united with her again. Because I’ll tell you what, there’s something about that grin that made everybody smile.”

A multimedia presentation created by event organizer Lucas Smith, McDaniel’s cousin, featured photographs and video of Cayce as a child; the song, “Gone Too Soon;” newspaper articles about the case, including postings of $25,000 rewards; and audio reflections by friends and family.

“I pray every day that we’ll find out what happened,” said one speaker. “We’re going to keep fighting for you,” said another.
“We are her voice,” said Amber Treadwell Hansen, one of McDaniel’s closest childhood friends.
The video concluded with words written in colored crayon by McDaniel as a young child: “I love you always. Cayce.”
Big turnout
“This is absolutely one of the biggest events we’ve had,” Ms. Hansen said in a media interview. “Considering we’ve had several events over the last 21 years, I would say this one is probably comparable to the very first one we had. We had a ‘Celebration of Hope’ in November after she disappeared in August. It filled up the Christian Church. The community really came out for that one. Over the years, they kind of ebbed and flowed. The last couple we’ve had have been real slow.”
“This is amazing; this was a lot more people than I expected,” said organizer Lucas Smith after Wednesday’s event. “When I first started this about a month out, I ran into a few people, and a few people contacted me and said, ‘We need to do this again.’ I said, ‘Somebody’s got to do it.’ So I just put it on my back. I never expected this many people. At one point in 2011, I think we had twenty-five people show up.’
Other speakers Wednesday included Vineyard Pastor Larry Eddings; Milan Police Chief Bobby Sellers; Brandon Barnett, producer of the “Searching For Ghosts: The Disappearance of Cayce Lynn McDaniel” podcast which is investigating the case; Rickey Alexander of Decaturville, victims’ advocate and family liaison for the Holly Bobo family; Amber Treadwell Hansen, a close, childhood friend of McDaniel’s; and Kim Smith, McDaniel’s aunt who lives in Chattanooga.
Police still investigating 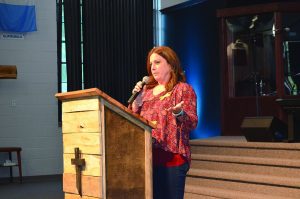 REMEMBERING HER FRIEND – Amber Treadwell Hansen said it is hard to speak about the disappearance of her close friend, Cayce McDaniel. “We were kids with a bond that couldn’t be shaken,” Hansen reflected in a Facebook post before last week’s candlelight vigil service. “I can still feel the ache of my stomach from laughing so hard with her. …My peace comes from knowing that God is taking care of her. He comforts me. His timing is always perfect. Justice will prevail one day.”

Police Chief Sellers said the McDaniel case has never been closed, and her disappearance remains under investigation by Milan officers. Chief Sellers was a Milan police dispatcher in 1996 and has observed numerous aspects of the investigation first hand. He said he made a personal promise to try to solve the case.
“We’re doing everything humanly possible to find her,” said Sellers.
“We’ve spent tens of thousands of dollars and thousands of man-hours over the years, and used all the resources we have with the TBI, FBI, the marshals and other outside agencies,” said Chief Sellers. “Before I leave, or before I retire or get fired, or whatever happens to me when I’m no longer the Chief here, I want to be able to lay my head down at night, when that time comes, and say that I did everything humanly possible to try to find Cayce.”
“Searching For Ghosts”
Speaking to the church audience, Brandon Barnett said he was motivated to produce “Searching For Ghosts: The Disappearance of Cayce Lynn McDaniel,” an audio podcast that is available free online, after he learned that podcast investigations in other places had brought forth evidence that led to arrests in missing persons cases, particularly a missing woman case in Georgia.
“This (podcast) medium is doing this all around the world,” said Barnett, a musician who performs instrumental, blues guitar music for the podcast, which features interview segments and people talking about the McDaniel case.
Barnett said as he learned details about McDaniel’s disappearance, he felt guilty about not doing something to publicize the case. He said he felt “ticked” that the case remained unsolved. “I’m a private person, myself,” he said. “I don’t like to get into everybody’s business. (But) I hope you’re ticked. It will take good people standing up. I know people are scared. But we will not sit down. We will not shut up. Somebody knows something. Maybe they’re locked up, or maybe they’re walking around.”
Several relatives and friends of McDaniel’s family said they supported the “Searching For Ghosts” podcast.
“I’m on board; I think it’s a great thing,” said Amber Hansen. “It has brought awareness and attention to her case that’s long overdue. Whether it’s leading anywhere, I don’t know, because I don’t think (podcast creator) Brandon (Barnett) and the Milan police are working together. I think the police probably have their reasons. I try not to step on any toes. If I can, I talk to the police or talk to Brandon, whatever’s going to get the most attention.”
“I think it’s a great thing that the podcast came about,” said Lucas Smith, a cousin of Cayce’s who organized the candlelight vigil. “All the time people are asking me questions. Everybody’s so interested in it now twenty-one years down the road. Hopefully this (event) tonight will catch someone’s attention, and we’ll finally get some answers. That’s my hope.
“The (police) stay in contact with us, and anything they can tell us, they will,” added Smith. “I believe they’re trying as hard as they can. I mentioned friction between the podcast and the police department. It’s hard to get them on the same page, because the police can’t release certain things.”
Phelicia Rodgers was among those attending Wednesday’s service. Her mother, Janie Sue Lindsey went missing fourteen years ago in Carroll County, and the case was never solved.
She’s followed the McDaniel case closely, including listening to “Searching For Ghosts.”
“Missing people are close to my heart,” said Rodgers. “I believe the truth will come out (about Cayce) because of the (“Searching For Ghosts”) podcast. Most of these cases go cold, and they drop them. Information that hasn’t been public before is coming out through this podcast, and that may be what is needed to bring closure to this case.”
Posted in Breaking News, Mirror Exchange Breaking News, News