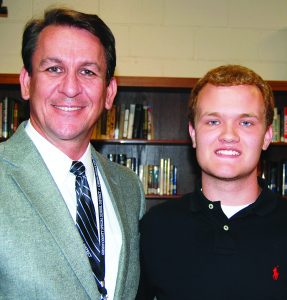 The only thing missing from the Gibson County Special School District board meeting Thursday evening was the red carpet.

District leaders recognized a host of student achievers. Before shining the spotlight on the youngsters, Director of Schools Eddie Pruett received the Northwest Superintendent of the Year Award from the Tennessee Organization of School Superintendents (TOSS). Dale Lynch presented the plaque, saying like the students in the audience, Pruett is “at the top of his game.”

“You’re very deserving of the award,” she said. “You always put the kids first. Thank you for that.”

“It’s a job that I enjoy, and nights like tonight are the reasons I enjoy it,” Pruett said, turning attention to the students. “I want to thank you all so much for the hard work. Students, you didn’t take the path of least resistance. You persevered.”

“We’re extremely proud of your hard work,” she said.

Amanda Cary represented GCHS. She thanked the board for its support of AP courses.

“Every time we’ve asked for something, the board has said yes,” she said.

She and Pruett recognized Corey Sweatt, the only student who was able to take three AP courses as a junior, for scoring 5’s in US History, English Literature/Composition, and Psychology. Pruett also announced that Sweatt has been named the Tennessee School Boards Association (TSBA) Student Recognition Award winner for the Northwest district. He is now eligible for the state award.

Richardson received the Teen Institute Advisor of the Year Award at UT Martin.

This year, South Gibson students also attended Teen Institute and will charter a SADD chapter in their school. The students said the institute empowered them to help their classmates.

“I feel like everyone needs the opportunity to be a part of something like this,” Turner said.

Richardson said the GCHS SADD chapter earned the Gold Award. Chapters get points for the activities they host and special functions they attend. Gibson County already has 1900 points for the current school year, and South Gibson has 800. Chapters must earn at least 3000 points to get the gold.

Legislative update – Pruett gave the board a run down of important legislation from the previous session. He said that while bills approving school vouchers and seat belts on school buses did not pass, they would likely be re-introduced next year.

Legislation that did pass included:

• Beginning January 1, 2018, districts must post a phone number to report complaints about bus drivers on each school bus.

• Schools must coordinate at least one armed intruder drill with local law enforcement each year.

• The state has raised the threshold a district may spend without seeking bids from $10,000 to $25,000. GCSSD policy currently states that leaders may not spend more than $7500 without bids. Finance Director Terry Cunningham said he would like to see the board increase that, saying it would help him with emergency purchases and would cut down time needed for bid processes. He said the district would still get quotes. The board agreed to discuss it in September.

• All high schools must offer at least four post-secondary courses. Pruett said the district is well above the minimum.

• Fire drills are to be conducted once every 30 days instead of once a month.

• Tennessee History will make a comeback in the 2018-19 school year. Districts had gone to teaching state history as it pertained to what students were studying in other social studies courses.

Solar eclipse – Pruett said the district has purchased NASA-approved safety glasses for every student and staff member for viewing the total solar eclipse on Monday, Aug. 21. He said principals are currently making plans for what their individual schools will do to view and teach students about the eclipse.