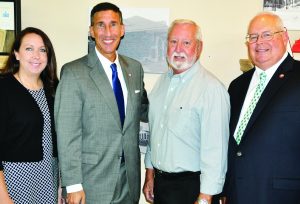 “Tax reform is coming down the pike really soon,” Kustoff said. “I’m encouraged by the productive conversations we’re hearing here and in Washington.”

Kustoff said the goal is to reduce individual and corporate tax rates. He would like to make it easy enough for most people to fill out their taxes on a postcard, which he said would be a huge economic boon that would put more money back in people’s pockets and in small businesses.

“It makes all the sense in the world that the time is right now,” he said. “The real challenge is to make it revenue neutral so that the tax cuts become permanent.”

The freshman congressman said he is concerned with the national debt, which is nearly $20 trillion.

“That scares me,” he said. “It’s one of the reasons I ran. We’re not moving quickly enough to reduce the national debt.”

Kustoff said there is a plan to balance the budget within 10 years, produce $9 billion in surplus and $6.5 trillion in total debt reduction.

“We’ve got to look at ways to fund the repeals,” he said. “We’ve got to simplify the tax code. We need to reform the IRS into an agency that serves the people of the United States of America.”

About health care, Kustoff said the system is in bad shape.

“The situation has become more serious as we approach the 2018 deadlines,” he said.

Kustoff said that in Tennessee, more than 75 percent of citizens have only one choice in health insurance. He said he voted to repeal and replace Obamacare because it has failed and said senators must act in the next 12-24 months to prevent further failure.

“We’ve got to pay attention to our national security,” he said.

Kustoff said that despite media reports of chaos in the White House, President Donald Trump is working well with the House of Representatives.

“Congress and the president are getting things done for the people,” he said. “I’m really very proud of the accomplishments we’ve done in the House of Representatives. I can not be more proud of this country and our leadership and our people.”

Halford, a Republican serving the 79th district, is in his fifth term and ninth year in the state house. He reviewed the past legislative session.

“Tennessee right now is in the best situation,” he said. “I think we’re in really, really good shape.”

Halford highlighted a $37 billion balanced budget that included putting $132 million into the rainy day fund, a record year for Tennessee Promise participation, a raise for teachers and state employees, completion of a $360 million payback to TDOT, passage of a broadband access bill, and increasing the gas tax.

“I believe it was the right thing to do,” Halford said. “It’ll mean a lot to those again in rural areas.”

Gibson County should see an increase of about $800,000 for road projects.

“I think we did a good job this past year,” Halford said. “We laid the groundwork for some good legislation coming up this next year.”