Milan High School’s Work-Based Learning program has only been in place for one year, but it has already drawn the attention of the area schools, the Tennessee Department of Education and Governor Bill Haslam.
At last Monday’s meeting of the MSSD Board of Education, Director of Schools Jonathan Criswell announced that the program would be recognized by the governor and used as a model program for other schools across the state.
“The Department of Intellectual and Developmental Disabilities was very impressed with our program,” said Lynn Gonzales, Instructional Specialist at Milan High School . “They’re impressed with the experiences that we’re able to provide our students and the jobs that we’re able to put them into.” 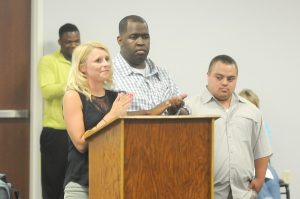 STATE-WIDE SUCCESS – MSSD Instructional Specialist Lynn Gonzales (left) updates the School Board on the Work-Based Learning Program at Milan High School. The program will be recognized by Governor Haslam and will be used as a model for the rest of the state. Gonzales was joined at the meeting by two of the program’s success stories, Chase Bardwell (center) and Joey Wall (right). Photo by Logan Watson.

Joining Gonzales at the meeting were Chase Bardwell and Joey Wall, two of the Milan students that were placed by the program last year. Bardwell worked with Douglas Health Care, running the hydration cart and greeting the neighbors. When he finished his job, Bardwell would sing and play piano for the residents.
“He’s very talented and has been a joy to the people living there. It was really a win-win situation,” said Gonzales.
Wall, who received Milan High School’s first Occupational Diploma in May, was placed in the cafeteria at Milan Middle School. Wall unloaded freight, organized the stockroom, stocked condiments and occasionally helped with food prep until he aged out of the MHS RISE program.
“Joey recently applied for, was interviewed and accepted a position at Milan Elementary School working part-time,” Gonzales announced. “He has left high school prepared for a job, and now he is a coworker of mine, which I think is amazing.” Gonzales told the Mirror-Exchange that, in the past, many students with disabilities had left school with little to no life skills because so much of their time in school had been spent focusing on basic reading and math skills. The Work-Based Learning Program teaches students “soft skills”, such as proper social behavior, interviewing skills, taking initiative and problem solving. More importantly, it shows students with limited options that they are capable of being a productive member of society.
“These kids need something to do,” said Gonzales. “They want to know that they have a purpose in life, just like the rest of us. This program helps them, as well as employers, figure out their strengths and focus on their abilities rather than their disability.”
The program has been recognized in the annual Expect Employment Report for the governor, which details how Tennessee has made strides in improving employment outcomes for people with disabilities, but Gonzales stated that it was not solely for students with handicaps as severe as those of Bardwell and Wall.
“Many Special Education students wind up on the street because they’ve never been shown that they’re capable of holding down a job,” said Gonzales. “The statistics are startling, whether it be because of their home environment, gang involvement or their limited academic skills. If we don’t step in, they’re going to go right back into the street. That’s a cycle we are trying to break.” 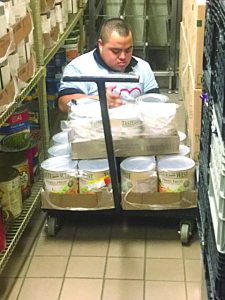 JOEY WALL, seen here working in the MMS cafeteria, aged out of Milan High School’s RISE and Work-Based Learning programs in May. Wall received the first Occupational Diploma at MHS and is now employed part-time at the Milan Elementary School cafeteria. Photo submitted.

Typically-developing students have also used the program to gain skills and experience that will benefit them in the future. Last year’s Valedictorian at MHS, Alex Twilla, took advantage of the program’s opportunities to work with MSSD Technology Coordinator Craig Rogers. With Rogers’ assistance, Twilla developed the school’s website.
One of the reasons the program has been so successful, according to Gonzales, is the support it has received from local businesses. Walgreens, Vestal Automotive, NHC, Motor Parts and Bearings, the Milan YMCA and many others have expressed interest in employing students in the program.
“We’ve gotten a lot of positive feedback from the community,” said Gonzales. “I had so many businesses interested that I did not have enough students to place. Nobody has ever said no. That’s the wonderful thing.”
Gonzales stated that she’s proud of the program’s success and thinks it has the potential to change the lives of students who have learning and developmental disabilities.
“This is a game-changer for these students and our community,” said Gonzales. “It will build bridges and open doors that weren’t available for these kids before. I’ve been teaching Special Education for 15 years, and this is the best thing I’ve ever been a part of. I really feel like we’re making a difference.”
Due to class scheduling conflicts, only 10-15 of the 25 students that signed up for the program will be available for jobs through the program. If your business is interested in hiring students from the MHS Work-Based Learning Program, contact Lynn Gonzales at 686-0841.