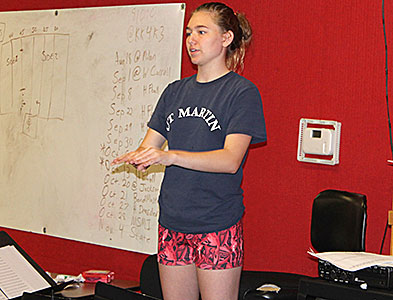 Humboldt Jr./Sr. High School band camp wrapped up last Friday as members prepare for upcoming field shows at Viking football games.
Second year band director, Matthew Sanders, said this was a good camp and much was accomplished.
Heat and humidity played a role in the amount of time band students practiced outside. Morning and evening practices allowed for slightly cooler rehearsals. Afternoons were used to work on music inside.
Sanders said there are 27 members this year, compared to 19 last year. Seniors are Katherine Shields, C.J. Bryson, Courtney Hutchison, Trinity Holzkpf, Katelyn Brown and Diona Edwards Hutchison will lead the band as field commander. Shields and Bryson are band captains.
The week prior to band camp was leadership camp and rehearsals. It was a time to prepare for band camp.
Monday of band camp, Sanders focused on the basic fundamentals. With a new 8th graders and freshmen, marching and playing at the same time is new.
Tuesday included more fundamental detail while moving more toward the show and setting drill (marching steps of the show).
The heat forced Wednesday to be short but the band managed to finish the basic training and began working on the music to the second tune of the show.
Thursday was another hot day. They reviewed the basics and continued to setting drill for the opening number of the show. That evening, they put the music and drill together on the practice field. 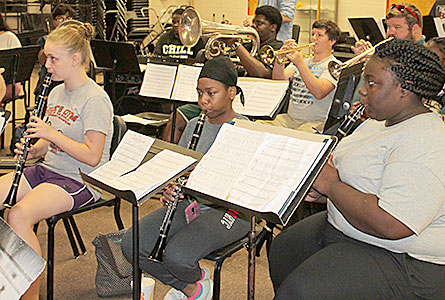 Friday is typically a half-day. That morning was a recap of everything they had learned from the week of camp.
This year’s field show is entitled “In the Dead of the Night” and has a dark theme.
The first tune is “Danse Macabre” by Saint Saens. Sanders said it is French for dance of the dead.
The second song of the show will be “Clair de Lume” by Claude Debussy. This French Impressionist piece was originally written for piano but has been transcribed for marching bands.
The final selection of the show is “Welcome to the Black Parade” by My Chemical Romance. Sanders described this tune as a post hardcore rock song from the mid 2000s. It will feature a baritone solo by Bryson.
Sanders noted this year’s show is approximately eight minutes, which it typical for a halftime field show. 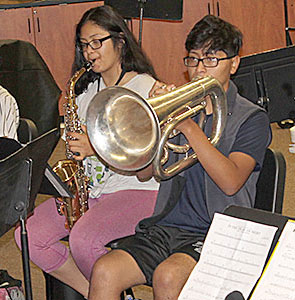 Sandra Chavez on saxophone and Eli Coronado on baritone

Since the band will not have another rehearsal on the practice field until school begins, Sanders has confidence his students will work on the music in the mean time.
The first HHS football game this year will be in Milan on Friday, August 18 where they will perform the first number only. He plans on having the first two songs ready for show by the first home game on Friday, September 8 against Peabody. The show should be complete by mid-September, Sanders said. 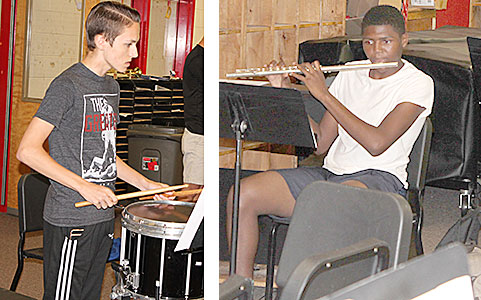 Lucas Williams on snare drum and Quinn McClinton on the flute 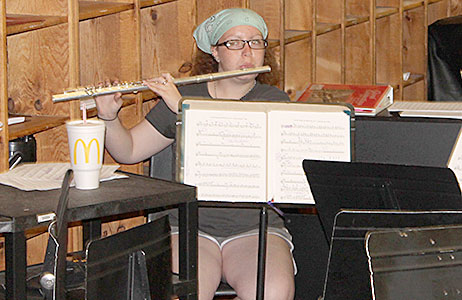