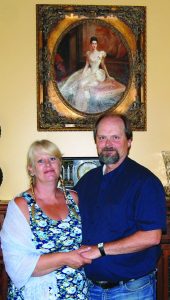 When Jesse Gordon walked in the door of 310 South High Street in Trenton, he knew he was home.

Gordon bought the Italianate home in 2008, named her Villa Belle, and began the restoration process that continues today.

“This is ongoing,” Jesse says. “What I’ve done is basically take it back to the style [of the original]. The house had good bones.”

R.N. Davis built the home in 1857 for his wife Belle, for whom Jesse has named the house. Italianate was one of the most popular Victorian-era housing styles of the time. The style, inspired by villas of Italy, is defined most by the use of single or paired decorative brackets under wide cornices.

Davis’ family lived in what was then called Davis Springs (now Frogjump) on a large plantation and owned a business in Trenton. During the Civil War, Davis fought for the Confederacy in Tennessee’s 47th Regiment. His unit marched from Trenton to Shiloh, the only re-enforcements for the South in the bloody battle.

The Smith family married into the Davis’ clan. Through his research, Jesse, who calls himself a history guy, has learned that the Smiths were Hessians, German soldiers hired by the Yankees to fight for the North. They were blacksmiths by trade and took the surname Smith from their vocation.

“You basically had North and South staying in the same house,” Jesse says.

The last member of the Smith family to live in the home was Isabelle who left in 1993. In her later years, she became paranoid and began living in a small storage room on the second floor. She wore a groove in the floor under the door where she kept her pistol aimed into the outside hallway in case she had to shoot an intruder.

“The Nowells saved her,” Jesse says with appreciation.

Most of the floors in the home are original as is the stained glass in the windows. The wainscoting upstairs is made of wood from the Davis’ plantation. There are eight fireplaces, four bedrooms, two-and-a-half baths, a formal living room and formal dining room, and a spacious backyard Jesse and his wife Lesley, who moved to Trenton from Canada in January 2016, have transformed into the perfect area for relaxing and entertaining.

They like to entertain, Lesley says. The couple blends antiques with current pieces to make guests feel at home.

“The house is not a museum,” Jesse says. “We live in our home. We enjoy our home. We try to make it comfortable.”

The couple says there are always projects. Jesse, a quality engineer at MacLean Power Systems in Trenton, says the ongoing renovation doesn’t overwhelm him; it’s a process that he thinks through methodically. This summer, he and Lesley are concentrating on the front steps to make them “more grandiose” with a curved staircase. They may add a fountain and garden gate in the front as well.

They work with their friends in the “Crazy Old House People Club” in Trenton, lending and borrowing tools, giving and asking for advice, and swapping stories about their historic homes.

“We all work together,” Jesse says.

He and Lesley do not call themselves owners but caretakers of Villa Belle. The sign out front pays tribute to the families that came before them, and they hope they are adding to the home’s beauty and history.

“We want to save it for future generations,” Lesley says.