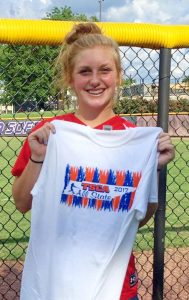 Neal traveled Tuesday, June 13, to Trevecca Nazarene University in Nashville to receive her award. In her freshman year at Gibson County, Macy had a .500 batting average with eight doubles, a triple, and a home run. This year she received Gibson County’s Batting Award and Stolen Base Award in addition to being named to the 14-A All-District Team. She set new Gibson County season records with 23 stolen bases, 49 hits and 33 runs scored.

The Tennessee Softball Coaches Association is a statewide organization for all Tennessee softball coaches. TSCA serves as the voice of Tennessee High School Coaches who wish to improve and promote the sport of High School Fast Pitch Softball.

John Conditt, Greg Amacher and Ronnie Burke serve as executive directors of the TSCA, working with coaches from the three sections of Tennessee, East, Middle and West. Also, from these sections coaches will come from all classifications of the TSSAA, AAA, AA, A and Private Schools. The TSCA has also invited all university and college coaches in the State of Tennessee to join as members. The TSCA hopes that the university and college coaches can give the organization many ideas and help generate a bond between high school coaches and college coaches. TSCA plans to work closely with the TSSAA to develop feedback from high school coaches on rule changes and elements that are important to high school softball coaches and the young ladies that play the game.