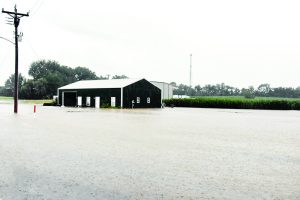 DYER AMBULANCE STATION FLOODS (above) – Rising water from heavy rain Sunday afternoon gushes into the Dyer Ambulance Station at the Industrial Park in Dyer. The ambulance had to be moved to Trenton. (Photo by Lori Cathey)

Sunday afternoon around 3:45 p.m., the National Weather Service issued a flash flood warning for Gibson County. Heavy rain in little over an hour caused local roadways to flood around Dyer, Rutherford and the Good Luck community. Rainfall amounts reported from local gauges ranged from around four inches in the Good Luck community to three inches in Dyer. A little over 3.5 inches of rain was reported in Rutherford.

The rain caused many small creeks to spill their banks and flow over roads that were closed, but the water started receding around 4:30 p.m.

The Gibson County Emergency Medical Service Ambulance Station, located at the Industrial Park in Dyer, flooded with water rising up to the wall outlets inside. For now the ambulance has been moved to the Fire Department.