Humboldt man arrested in Milan after returning to crime scene 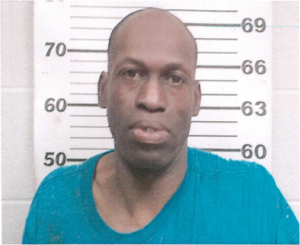 A Humboldt man was arrested earlier this month after returning to the scene of a robbery he committed just two days prior.
On May 31, James Anthony Slates, 48, knocked on the door of a Stinson Street home, but when he was told to leave, he pulled a gun on the homeowner. With his gun pressed against the victim, Slates forced the man to put a number of his belongings in a bag, including a Playstation 4 and his cell phone.
According to the police report, Slates told the victim that he had “hit up a few houses and killed two people,” and that if he did not cooperate, Slates would take him to his neighbors’ house, and make him watch as he killed them, then the victim. Slates made numerous threats to kill the victim, even going so far as to attempt to force the victim to perform oral sex on him.
When the victim refused to fellate Slates, the gunman forced the victim to take him to the bank, demanding that the victim withdraw $250 for him. When the victim told him he didn’t have the money, Slates made the man drop him off at Short Anderson Street.
Before exiting the car, Slates told the victim that he “didn’t get enough from him” he would return to his home on Friday for the $250, which the victim was supposed to leave under the rug on the front porch. Slates told the man that if he went to the police, he would kill him.
True to his word, Slates returned the following Friday, where he found the victim waiting for him. Police responded to a call of a fight at the victim’s address, but when officers arrived, the man and a neighbor had Slates on the ground.
Slates has been charged with one count each of Aggravated Robbery, Aggravated Assault, Aggravated Burglary and Especially Aggravated Kidnapping. Slates was transported to the Gibson County Jail where he is being held on a $50,000 bond. Slates will appear in Milan General Court on June 14.