A  late addition to the agenda of last Monday’s meeting of the MSSD Board of Education caused a heated discussion between some board members and Director of Schools Jonathan Criswell.
After the meeting was called to order, board member Yolanda Left requested an update on the MSSD’s hiring of African-American teachers. Lett stated that she had noticed a number of job openings online and wanted to know where the district stood in terms of filling those positions.
Director Criswell and the board have discussed the need for African-American teachers in Milan schools multiple times since Criswell’s hiring in August. During October’s board meeting, Criswell provided the group with information regarding the hiring and interviewing of minority teachers for the 2016-17 school year. Ten teachers were hired before the last school year began and out of 32 interviews conducted, only four minorities were interviewed for the positions. Only one of those four was African-American. Data on the number of African-Americans and other minority candidates that applied for the positions, however, was not available, as it is illegal to ask the race of a prospective teacher in the application. 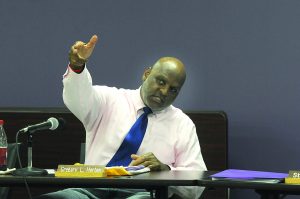 AFRICAN-AMERICAN TEACHERS – Board member Greg Horton charged the MSSD and Director of Schools Jonathan Criswell with not doing enough to hire more African-American teachers and administrators. Horton claimed that the MSSD puts on the “same song and dance” each year. Photo by Logan Watson.

Criswell informed the board last week that there had only been three positions filled during his tenure as Director of Schools: the Principal positions at the elementary and high school, as well as a teaching position at MES. Criswell stated that there had been an African-American candidate interviewed for each position. While none of the applicants were chosen for the jobs, Criswell stated that he had been to several recruiting fairs, some as far away as Nashville, and that he was in the process of actively recruiting two African-American individuals from within the MSSD.
Lett questioned what Director Criswell was looking for in an applicant, wondering why the African-American candidates were “missing the bar” and not being hired.
“I don’t know that they’re missing the bar at all,” Criswell replied. “The two interviews that I conducted, both were very good interviewees. When it comes down to it, we go through a set of questions in the interview, make sure that all applicants are qualified and certified for the position that they are applying for, then you find the best fit for that position and the ability to provide a great education for our students.”
Criswell stated that he was aware that the diversity of the community required a diverse teacher population within the MSSD.
“As long as you are aware of that and we keep seeking qualified applicants, then I have no issue, but I hope in the future that we are going to get teachers that meet these qualifications,” Lett concluded.
Board member Greg Horton was unsatisfied with the representation of African-Americans in the hiring process, claiming Criswell’s explination was “the same song and dance each year.”
To our community, and to me, you do these interviews, but you never hire African-American teachers,” said Horton. “Some people in the community are hopeful that you’ll change that, but this song and dance is a continuation.” Horton stated that never seeing an African-American teacher hired causes the community to loose faith in the school system. “This system continues to not hire African-Americans. In any interview, they tend to find something lacking in African-American administrators, and it needs to be changed. It seems like there’s an unwillingness of the system to do that.”
Director Criswell responded to Horton’s criticisms, reasserting his stance that he has always been in favor of hiring a diverse workforce in the MSSD. 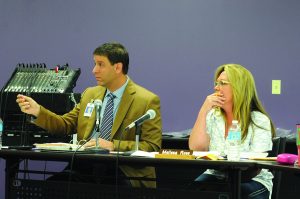 TENURED TEACHERS – Director of Schools Jonathan Criswell refers to Tennessee Code Annotated during a discussion as to whether or not Social Workers employed by the MSSD should be extended tenure along with traditional teachers. The board approved tenure for six teachers and staff members.

“I do think it’s unfair that we’re having this conversation and I’m not even halfway through the hiring process yet,” said Criswell. “To make that accusation that I have been part of a problem that has existed before I got here.” Criswell explained the reasons that the three candidates were not hired as succinctly as possible. “What I’m asking for is that you give me a chance to at least get through the first part of hiring people, then we can have that conversation again.”
Horton said that he felt the criticism was fair, telling Criswell that the Directors before him dropped the ball. Horton went on to say that a pool of African-American candidates would help lessen the culture gap rather than one “token” candidate, but both Criswell and Horton agreed that there is an urgency inasmuch as the hiring of African-American and other minority teachers is concerned.
“We do have a problem that is arising in our school system,” added Lett. “There are things that are going on with our school system, especially in the middle school. There are things that are happening that need to stop. I’m not saying that the hiring of African-American teachers is going to cause it to quit, but we need teachers in our school system that feel it.”

PRE-K PROGRAM – Director Criswell informed the board that the application process for the Voluntary Preschool Program is conducted, adding a screening test where students demonstrate how much they know (i.e. saying their alphabet, retelling story, etc.] “give a basline” of their learning skills so that their growth can be tracked through the year. Currently 99 students are registered for Voluntary Preschool next year, 63 of which have qualified as a 1, 2 or 3 under the state’s rules, which give them the highest priority based on income and other at-risk factors. Typically-developing peers for the students in the Special Education Pre-K will likely come from the 4 and 5-rated students. Registration for Voluntary Pre-K will run until June 26.
Criswell also informed the board that HeadStart had denied the MSSD’s application for a three-year-old class, which would have served 16 at-risk children in the MSSD. He clarified, however, that the application was only denied because HeadStart had already allocated all of their resources for the year. The MSSD will continue to reapply for the HeadStart classroom.

CELEBRATING SUCCESS – The Board of Education recognized a number of MSSD students for their recent accomplishments, including everything from the classroom to the cowpen. The board recognized Autumn and Trinity Jones, who were chosen as DI Reporters. DI Reporters, a part of the Destination Imagination program, are students that want to enter the acting or reporting fields in the future. The girls will get to attend the DI Global Finals next year. Orlandis Williamson was recognized for making the Tennessee-Kentucky All-Star Team, representing Milan out of 800 contestants, as well as making the Honor Roll in all four grading periods. Williamson will play June 17 at Austin Peay University. Williamson was the third pick out of 60 players. Carson Bodiford was recognized for placing third in the State HOSA Competition in Physical Therapy. This was Bodiford’s third year competing at the state level, which included a written test and a choice of six physical tests, such as range of motion, ambulating a patient, ambulating a patient with a walker, cane and crutches, and applying an ice pack. Bodiford will be competing in Nationals in Orlando in June. The board also recognized students that participated in the Tennessee Youth Rodeo, Connor Griffin, Hudson Bolton, who placed first in junior bulls, Allie Maxwell and Mackenzie Johnson.

TENURED TEACHERS – After some discussion as to the legal definition of a teacher, the Board voted to approve tenure for six teachers and staff members. Milan Elementary teachers Sandra Bradford and Allison Reed, MMS teacher Lauren Rich and MHS teacher Andy Tatum were each approved for tenure. MSSD social workers Kenyata Jones and Amber Shelby were also approved for tenure, although board member Greg Horton stated that he felt tenure should be extended only to those who fit within the traditional definition of a teacher. Tennessee Code Annotated, however, defines teachers as “teachers, supervisors, principals, director of schools, and all other certificated personnel employed by any local board of education.” The board also approved the hiring of a new Special Education teacher at MHS. 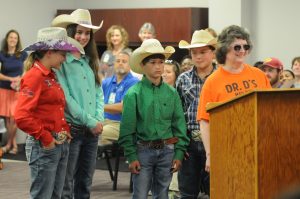 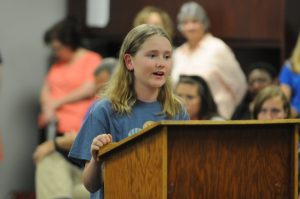 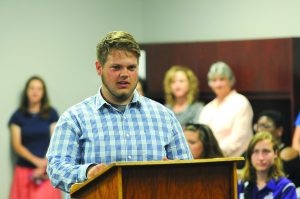