Both Metro Narcotics and the 28th Drug Task Force received information that a man the units identified as Hayes was attempting to sell heroin allegedly laced with the deadly drug fentanyl in the Madison / Gibson County area and joined forces to make the arrest.

On May 22nd, Agents began their joint investigation to purchase heroin from Hayes.  After speaking to Hayes via telephone, he agreed to sell Agents $1,000.00 worth of heroin near Lane College in Jackson, TN.

When Hayes showed up to make the deal, Agents were waiting and arrested Hayes without incident and recovered approximately one quarter ounce of suspected heroin.  It is not known at this time whether the heroin was mixed with fentanyl or not.   Because of the deadly effects of fentanyl, Agents had to take special handling precautions and send it directly to the T.B.I. lab for testing.   Hayes was transported to the Madison County Jail where he remains in lieu of an unspecified bond.

Special Agent in Charge of the 28th Drug Task Force, Johnie Carter said, “Heroin has become an epidemic in America and now you have these basement chemists adding fentanyl and carfentanyl into the mix and it is causing deadly results for many.”   He further added that not only is the cocktail deadly for users, but for those who innocently come into contact with it such as children, family members and law enforcement.  “It only takes an amount equal to a couple grains of salt to kill a full grown man”, Carter said.

The 28th Drug Task Force is made up of Officers assigned full-time from the Gibson and Crockett County Sheriff’s Office, Humboldt, Milan and Trenton Police Departments. 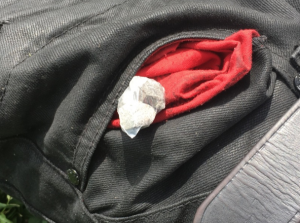