After an inmate walked away from a work detail in Humboldt last month, Gibson County Sheriff Paul Thomas took a lot of flack from critics and concerned citizens about the program, which he addressed at last Thursday’s meeting of the Milan Rotary Club.
“When I took office, there were 15 trustees,” Sheriff Thomas told the club. “We were getting a lot of requests from the inmates. A lot of them were just tired of sitting there all day, but some of them really wanted to do something constructive.”
The trustee program, which now has 88 members, is used to help reduce recidivism and help inmates readjust to life outside of prison once their debt to society has been paid.
“I’m really proud to say that several former trustees have gone on to be hired by the groups they have helped,” the Sheriff said. “Jon Hargett, who owns PRI, took a chance on one of our trustees, and now that man is a supervisor.”
The trustees also provide a lot of labor to local groups, as well as cities, that could not otherwise afford to pay for the work. Sheriff Thomas told the club that the city of Dyer has between five and six trustees that work for the five days a week.
“Trustee labor saves the city of Dyer close to $160,000 per year,” the Sheriff said. “That’s a conservative figure. And we haven’t cost anyone a job by putting these trustees to work. The only payment they get is lunch.”
Sheriff Thomas maintained his opinion that the trustee program was beneficial for everyone, despite the fact that James Owings abused the privileges provided by the program.
“There’s good and bad in any program,” Sheriff Thomas stated, “but you don’t cancel the program because of a bump in the road. We had one inmate that snuck off and got into a car with his sister, who was waiting for him. There were three other guys on that work detail. They could have all gotten into that car, but three of them kept right on painting that church.”
According to the Sheriff, the program is also beneficial to the trustees. Beyond helping at City Hall and the Parks and Recreation Department to help further their skills, the First United Methodist Church of Milan also provides a mentoring program for the inmates.
“There’s always a few that will abuse that privilege, but most of these guys are just good people that made a bad decision,” the Sheriff said. “Violent offenders and sex offenders cannot work in the Trustee Program. We make sure that we’re not putting the wrong people out in the community.”
“Opposition is easy. Proposition is hard,” Sheriff Thomas said about the program’s criticism. “Don’t just tell me what I’m doing wrong, bring me a solution.” 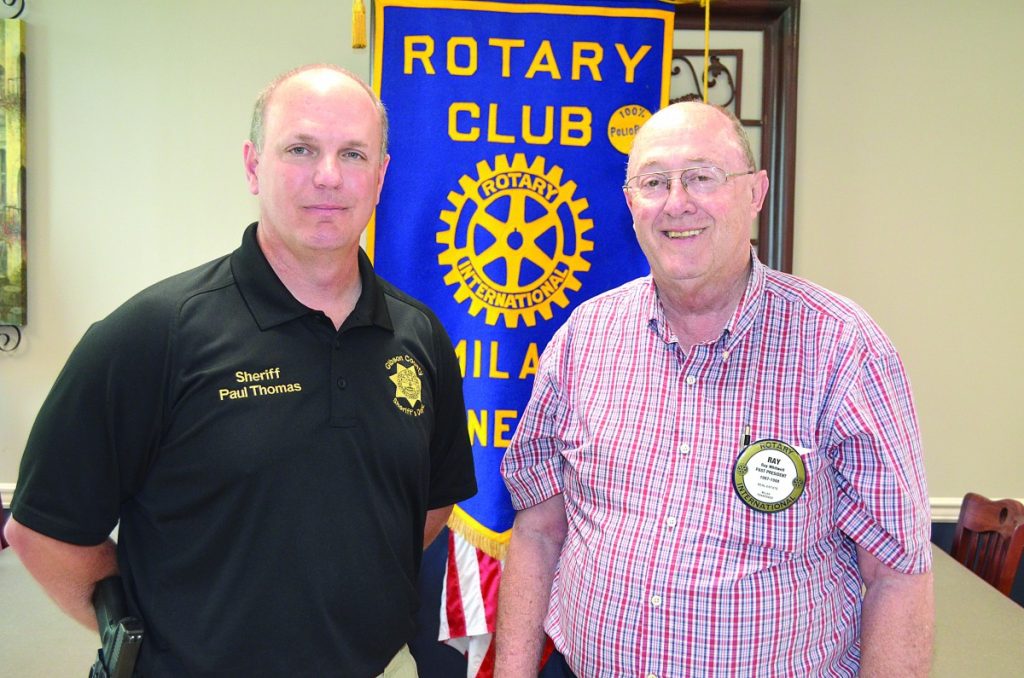 SHERIFF DEFENDS TRUSTEE PROGRAM – Gibson County Sheriff Paul Thomas spoke to the Milan Rotary Club about the good done by the GCSO’s Trustee Program in the face of criticism he had received following the escape of one trustee last month. Sheriff Thomas was the guest of Rotarian Ray Whitwell. Photo by Logan Watson.