Congressman David Kustoff made a brief appearance in Milan last week, stopping to speak to a joint meeting of the Milan Lions and Rotary clubs at the end of a whirlwind tour of Tennessee’s 8th Congressional District. Kustoff visited a number of farms and school agricultural programs in the region prior to his appearance, but spoke mainly on the national hot-topic issues of the repeal of the Affordable Care Act (ACA), the President’s recently proposed tax cuts and his work towards repealing the Dodd-Frank Act.
Kustoff, who campaigned heavily for Trump during the election, applauded the President’s American Health Care Act (AHCA), which he stated would replace the “failing” Obamacare plan. “The system isn’t working,” Kustoff told the groups. “I had to think strongly about my vote last week, but in the end, I came to the conclusion that…I had to step up to the plate. While I stand fully behind the bill that I passed, I’ve learned that in legislation, not everything is in there that you want. But there were a lot of things in there that I did want, and I know that there are going to be a number of changes that the Senate’s going to make once they vote on the replacement.” 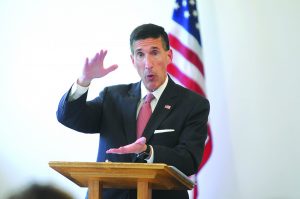 CONGRESSMAN DAVID KUSTOFF discussed some of the recent political happenings in Washington last week, including tax breaks, healthcare and the economy, with a joint meeting of the Milan Lions and Rotary clubs. Photo by Logan Watson.

With many insurance companies pulling out of the ACA, Kustoff compared the current Healthcare Marketplace to “having a bus pass with no buses or bus stops in town.” Kustoff went on to state that the new plan will “create competition”.
“I think ultimately this will lead to more insurers coming into the system,” he said. “I think it would help to spur competition if we allowed health insurers to sell health insurance across state lines. I think that will create competition and put price pressure on premiums and the government.”
He also claimed that there was misinformation circulating regarding the AHCA and the issue of pre-existing conditions.
“Pre-existing conditions is covered under this plan. If a governor wanted to pull a state out, and say ‘I don’t want to offer pre-existing conditions’, they could do that. Frankly, I find it hard to believe that any governor would want to eliminate pre-existing conditions. This bill does portion $8 billion to help states provide coverage for individuals that are a high risk for insurers. This is in addition to the $100 billion already in place to help these high-risk people. I’d like to get it done this year so that we can show the American people that we have their best interest at heart.”
Kustoff also discussed the President’s proposed tax plan, which, when it originated last month, would reduce the current number of tax bracket from seven to three (10, 25, and 35 percent). Statements made by Kustoff at the meeting now indicate that the new tax brackets would be set at 12, 25 and 33 percent, with a reduced tax rate for businesses and corporations somewhere in the neighborhood of 15-20 percent (Trump wants 15 percent, while the members of the House have discussed a rate around 20 percent).
“Our current tax system is entirely too complicated,” Kustoff said. “It places too much burden on the American people.” Kustoff stated that the tax proposal would allow individuals and families to keep more of their income and reinvest it in their communities.
“Businesses that have their cash parked outside of the United States, they want to get taxed at a lower rate,” Kustoff told the clubs. “Some of these companies have even moved their headquarters overseas so they get taxed at a lower rate. To me, as an American, I don’t quite like that. I find it offensive, but if I were a CEO of a corporation and I could save my shareholders money, I might be doing the same thing. There are so many companies invested overseas that want to come back. More jobs, better wages, better benefits and spending capital in the economy. It’s a no-brainer.” Kustoff went on to state that the reduced tax rates would help small businesses hovering around 50 employees that are struggling to grow because they are being forced to provide health insurance for their employees, and would help bolster the struggling economy in West Tennessee.
Kustoff also stated that there were attempts being made to make the tax cuts revenue-neutral, such as a proposed 20 percent tax on imports, which would go a long way towards making the tax cuts permanent.
“If that was enacted, it is projected that it would raise $1 trillion over ten years,” the Congressman said. Kustoff did acknowledge that there were some businesses that would go out of business based on the import tax, and that new car sales would take a hit, but claimed that those in favor of the tax say that the value of the dollar would adjust, offsetting the 20 percent tax.
Congressman Kustoff also spoke briefly about the introduction of the CHOICE Act, which he said would roll back some of the overreaching aspects of the Dodd-Frank Act, which was enacted as a safeguard against predatory lending practices and other factors that instigated the 2008 financial crises, making it easier for banks and individuals to lend and borrow money./ “There’s a lot going on,” Congressman Kustoff told the clubs in closing. “It’s an honor to do what you sent me up there to do.” Congressman Kustoff can be contacted by Twitter users by tweeting the username @repdavidkustoff. 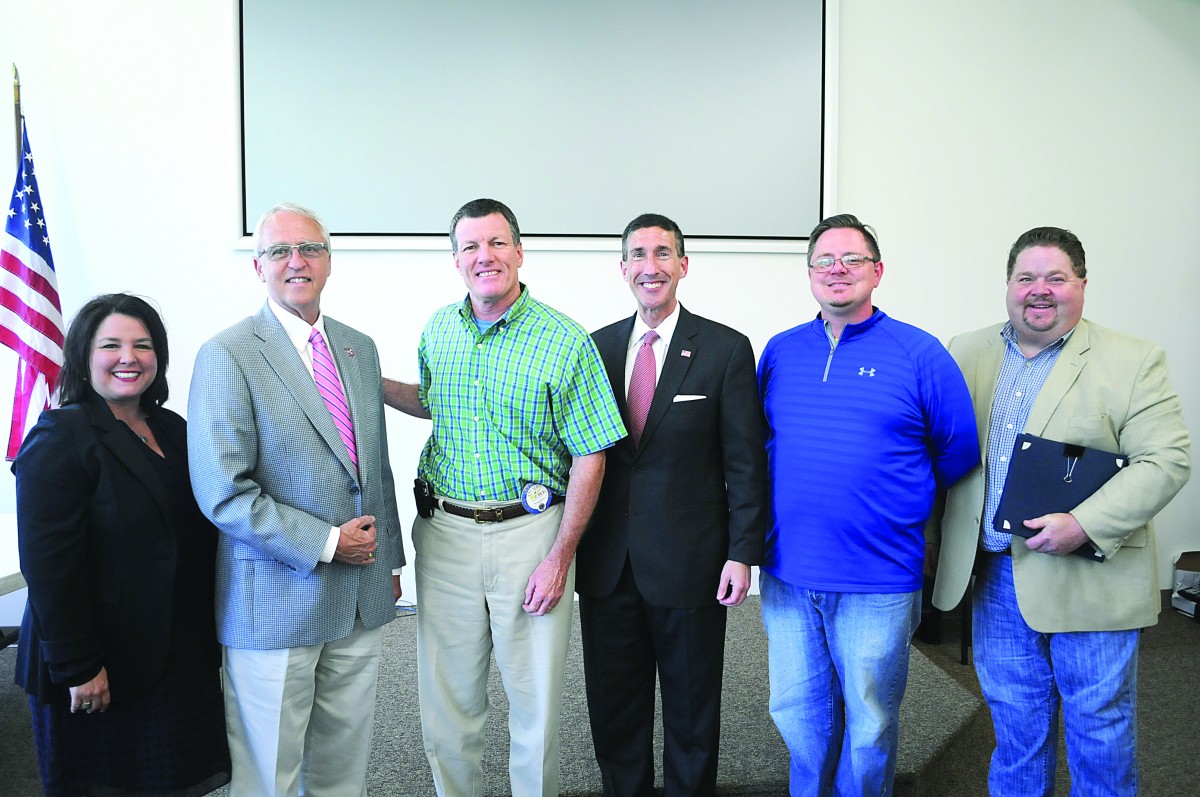