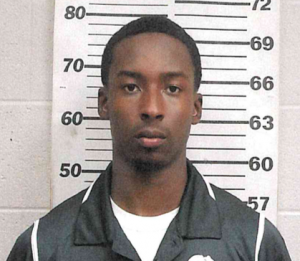 A Milan High School assistant football coach was arrested yesterday on charges of Statutory Rape by an Authority Figure.
According to the arrest warrant, Kendall White, 22, who is also an Educational Assistant at MHS, admitted to having sexual intercourse with a 16-year-old juvenile student.

During a forensic interview, the victim told investigators with the Milan Police Department that the incident occurred sometime between the dates of August 3, 2017 and August 17, 2017, just after classes had resumed. The victim stated that she snuck out of her house and met White in a vacant lot near her home. According to the victim, she and White had sex in his car on one occasion, but met with him during the 2016-17 school year.

The victim stated that she had classes with White and that the relationship started there. The warrant alleges that there are text messages between White and the minor that indicate a sexual relationship existed.

After being advised of the charges against him and his rights, White admitted to the relationship, confirming the victim’s account of the incident. White did, however, state that while he was talking to the minor last year, nothing happened between them.

White was charged with one count of Statutory Rape by an Authority Figure and placed under arrest on September 18, 2017. Bond was set at 15,000. White posted bond and was released. He will appear in Milan General Sessions Court on September 27 at 9:00 a.m.

“The Milan Special School District is cooperating fully with the local police department,”  said MSSD Director of Schools Jonathan Criswell. “Mr. White has been suspended without pay pending the resolution of these charges.”