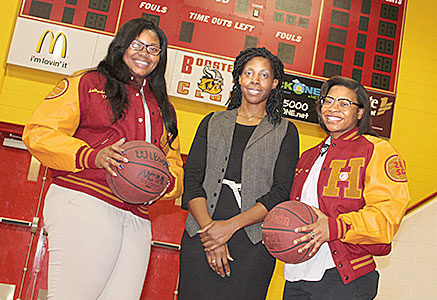 Practically everyone in Humboldt knows how well the Humboldt Viking basketball team did this year. They posted an impressive 31-2 record and made it to the state tournament.

But quietly, the Lady Vikings did something that may have gone under the radar. They completed their most successful season in years, many years.

That all changed when Coach Chandra Maclin accepted the head coaching position. Her first year, 2015-16 season, was an improvement with the Lady Vikings going 7-20, winning more games than the previous two season combined. This year, they made an even bigger stride going 13-15. If it weren’t for a couple of close games the ladies lost, a .500 was certainly in reach.

“I walked in knowing I had to teach,” Coach Maclin said of when she accepted the coaching position. “My hardest battle was to change their mindset. When you’re not accustomed to winning, it didn’t matter to the players if they won or lost.”

This year’s seniors, Chesslyn Owens and Aallysha Carter had played under their share of coaches in what seemed like a spinning carousel every year or two. For the past few years, new coaches came and went but the players’ attitudes were the same. That is until Coach Mac came in.

“She pushed us on and off the court,” Carter said. “She told us we were students first, then athletes.”

“She wants what she wants and when she tells us to do something, we do it,” Owens added. “We need that push—a kick in the tail. We actually learned how to be ball players.”

When Maclin took over the team, she said there was some confusion with all the coaching changes. She wasn’t sure which players were staying with the team or which were not.

One of her first tasks was holding a player/parent meeting. Maclin laid out her plan and what was expected in her program. The girls had a short scrimmage during the meeting where the new coach saw their strengths and weaknesses. She concluded the girls’ fundamental skills were lacking.

“All I knew was development had to happen,” Coach Maclin said. “Mr. (James) Walker and Mr. (George) Yarbro knew we had to change. We had to learn at the junior high level and continue that at the high school.”

Walker is principal of Humboldt Jr./Sr. High School while Yarbro is the athletic director. Maclin said Walker, who is a former basketball player and coach, brought a lot of insight and reinforcement. He suggested Maclin attend the PGC coaching clinic in Georgia, which Maclin said was great.

Maclin said both the  junior high and senior high programs are teaching the same system now. She’s even taking a step or two further by having her players work with elementary school girls, teaching them how to dribble, shoot, rebound and play offense and defense. This summer the Lady Vikings will hold basketball camps to work with students from every school in the Humboldt.

Their mission statement reflects their vision, “The Humboldt Lady Vikings Basketball program will provide year-round opportunities where area girls can come to develop fundamental skills and learn the game of basketball in a supportive, teaching environment.”

“I felt like I was starting over—a new player, disciplined,” Owens explained from a player’s standpoint. “If I go back and look at film, now I’m a totally different player. I thought I was good but looking back, I wasn’t. Now, I think of where I would be (without Maclin pushing her).”

“We had a new coach and I was expecting the same,” Carter said of her first year under Maclin. “At first I hated practice. But this time it was different, she was teaching. She developed me into a better player. We went from just going to practice. And games—win or lose—it didn’t matter. Now we want to win!”

“You can’t play unless you make the grades,” Owens said of one of Maclin’s rules.

Coach Maclin smiled as she watched her senior leaders talk about the improving program and how they advanced as athletes and students by buying into this new system.

“My seniors are leaders,” Maclin said. “It’s been an enjoyable experience to watch them improve.”

Another part of Maclin’s program is getting her players to watch college games on television, break down the defense being played and understand how the offense attacks that defense.

Maclin talked about attending a coaches meeting at the end of the season as district and region tournaments were about to begin. Other coaches noticed the improvement. Coaches were no longer looking past the Lady Vikings as an automatic win for them.

Beating Bradford for the first time in 10 years was a huge win and confidence boost for the girls. Beating Trenton when they were No. 3 in the district was another big achievement. And a big win over Union City toward the end of the season put the Lady Vikings on other teams’ radars and earned their respect.

“Next year’s goal is to continue to evolve,” Maclin said with pride. “We’re still looking for a .500 season, even 20 wins. With the new district, every night will be competitive.”

Another goal is for her players to advance to college, both athletically and academically.

“If you have goals of competing at college, you have to know what you are facing at the next level,” Maclin noted.

Maclin said both of her seniors are getting college attention and offers. Both Carter and Owens have college visits planned in the upcoming days and weeks.

“We’ve sent out stats and film to several colleges,” Maclin said on her seniors. “They have to chose the best fit for themselves, both academically and financially for their families.”

“One reason I want to do it (get a basketball scholarship) is because people say I can’t,” Owens stated. “I’m going to prove them wrong. I’m doing if for me and for my teammates.”

“Our goal is to graduate 100-percent of our athletes and have 100-percent of them attend post-secondary education,” Maclin said of preparing her players for the next chapter of their lives. “For a college program, you have to be good students, a good person and a good athlete. We don’t want them coming home after the first semester. We want them to be prepared. If you can survive us (Lady Viking program) you can go anywhere.”